Share All sharing options for: Barry Zito Meets With Rangers 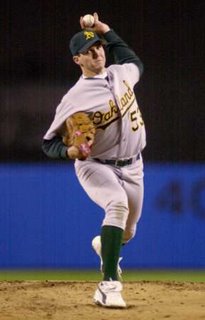 Scott Boras and Barry Zito went Texas yesterday to meet with Rangers owner Tom Hicks and GM Jon Daniels. As many as ten teams are pursuing Zito; however, many have expected Zito to sign with the Mets because of the close relationship with former pitching coach Rick Peterson. But, new Rangers manager Ron Washington, who worked for the A's all of since Zito was called up may have some influence in his decision. Zito has said he either wants to pitch in Los Angeles or New York. Zito was 16-10 with a 3.83 ERA in 34 starts and 221 innings with the Athletics last year. The southpaw has a career record of 11-1 with a 3.75 ERA at Ameriquest Field. The Rangers still have interest in re-signing Vicente Padilla and have talked about other free-agent pitchers, including Ted Lilly and Miguel Batista.