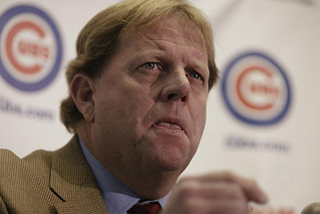 Cubs GM Jim Hendry has been in contact with Vicente Padilla and Gil Meche about pitching for the Cubs next season. Meche and Padilla are both asking around 8-10 million over 3-4 years. However, both are drawing a lot of interest. The Cubs may have a little edge with Meche because of Piniella's influence he had on players and Meche used to pitch for Piniella. On the other hand, the Blue Jays might overpay to fill the void in the rotation. Vicente Padilla is represented by Paul Kinzer, who represents Ramirez, which may also help the Cubs' negotiations with him. However, the Mets, Phillies, and Rangers have all shown serious interest in bringing him in. Padilla went 15-10 over 200.0 innings. Jim Hendry is also looking for an outfielder. It is known that the Cubs want Alfonso Soriano in right field so that could mean that Jacque Jones is gone. But, Julio Lugo, who also played for Piniella, said he was willing to play center. He has also expressed interest in playing short stop for the Red Sox. The Cubs do not want to commit to anyone for a long time because they have Felix Pie waiting for his shot. Jones said he would be willing to play center but Hendry probably wants to trade him for pitching because of the amount of money he is owed over the next two years. Cliff Floyd has also said he would like to play for the Cubs, and the Cubs appear to be in serious discussions with him to platoon in left field with the young Matt Murton. He will want a similar deal to what Frank Thomas got from Oakland. A deal, if any, should be struck by the end of the week, possibly at the Winter Meetings. It was also not known, but the Cubs designated Ryan O'Malley and Miguel Negron to make room for Clay Rapada and Rocky Cherry. The only surprise prospect left off the roster was C Jake Fox.