Share All sharing options for: Cubs Make Offer to Lugo 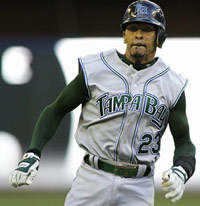 Since the Blue Jays signed Royce Clayton, they will no longer pursue Julio Lugo. So, the Red Sox, Dodgers, Giants, Mets, and now Cubs are in hot pursuit of Julio Lugo. Lugo, who played under Lou Piniella in Tampa, said he would be willing to play center field. If they sign him, it makes Jacque Jones or Cesar Izturis expendable depending on whether the Cubs are willing to play Soriano in center. There was no report on money with a deal but Lugo has asked for four years, 32 million. I bet the Cubs offered right around their, probably a little bit more. The article, from ESPN Insider said:

Cubs make an offer
Nov 29 - Toronto's pursuit of Julio Lugo ended when the Blue Jays signed Royce Clayton to a one-year deal. But the Cubs remain interested and have made Lugo a multi-year offer, according to ESPN.com's Jerry Crasnick.

Boston is looking at Lugo to replace departed shortstop Alex Gonzalez, and San Francisco continues to maintain a line of communication with Lugo's agents. While the Giants are looking at Rich Aurilia, Mark Loretta and Ray Durham as second base possibilities, they've talked about signing Lugo to play second and eventually shifting him to shortstop when Omar Vizquel retires.