Share All sharing options for: Cubs To Pursue Vicente Padilla and Cliff Floyd? 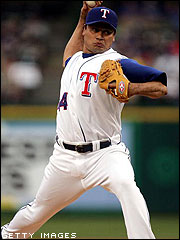 According to the Sun Times, the Cubs may make a run at Vicente Padilla. Vicente Padilla, who is represented by Paul Kinzer, Aramis Ramirez's agent, may make negotiations easier now that Hendry's and Kinzer's relationship is renewed. The Cubs, in need of serious pitching help, will also look to Gil Meche, Jason Marquis, and Ted Lilly to fill the availble spots. Also, the Cubs and Cliff Floyd have had discussions about a one year deal, but nothing serious yet. He has also heard from the Orioles and A's about a one year deal. Floyd, is looking for the same deal Frank Thomas got last year. He is hoping he can bounce back and prove he can hit 34 home runs again. ESPN's Jerry Crasnick said that Floyd's first choice is to stay with the Cubs, but if the Cubs are not interested, or focus on pitching, he will look elsewhere.