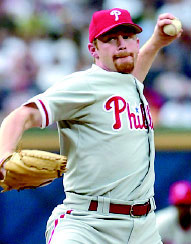 According to FOXSPORTS.com, the Dodgers and Randy Wolf are nearing a one year deal. The Dodgers are pursuing Wolf in case they lose out on Maddux, who is expected to want Mussina money(2/22.5). Wolf, 30, who missed a year due to surgery and then came back strong for the Phillies going 4-0. "From 2000 to 2003, Wolf went 48-39 with a 3.88 ERA, averaging 195 innings pitched and 165 strikeouts per season. In eight major-league seasons, he is 69-60 with a 4.21 ERA." He has proven he can pitch and I think teams are not worried about the risk with Wolf and his elbow. I think Wolf is a good pickup though, the Dodgers have great defense, especially with Juan Pierre in center, and Wolf can really thrive off that.