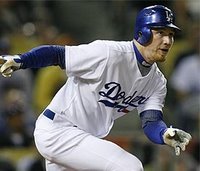 According to major industy sources, the Red Sox and Drew are closing in on a four year deal worth 14-15 million annually. The deal also includes an option for a fifth year. Drew would play right field for the Red Sox and bat fifth if Manny stays, but will probably bat forth because it appears Manny is on his way out. The signing will have to wait until December 1st so the Red Sox will not have to forfeit draft picks as compensation to the Dodgers. The deal will be announced before the Winter Meetings which will take place over December 4th-December 7th in Orlando.