Share All sharing options for: Jason Schmidt: Mariners or Dodgers? 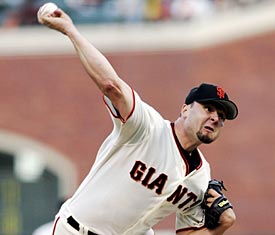 The Mariners and Dodgers are the front runners to land Jason Schmidt. It has been rumored that the Yankees and Cubs were after him, but, Jason Schmidt would prefer to stay on the West Coast. Seattle is Schmidt's home town, so the Mariners appear to have the advantage. If the Dodgers lose out on Schmidt, they are expected to pursue Ted Lilly. The Red Sox and Cubs are both showing some interest in Lugo. Although the Cubs have Cesar Izturis, it appears they would be willing to trade him to Boston or Toronto to make room for Piniella's favorite, Julio Lugo.