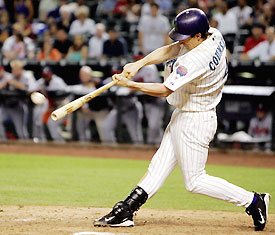 The Padres have reached a preliminary agreement with infielder Craig Counsell. It is a two year deal, but money was not disclosed. Counsell batted .255 with 4 HR, 30 RBI, and 15 SB. He would replace Barfield at second. The Padres also posted a bid for Kei Igawa. The Padres bid over 10 million and the winning bid was announced at 25 million. Officials will announce the winning bid tonight or tomorrow.