Share All sharing options for: Pirates to Pursue Jeff Suppan 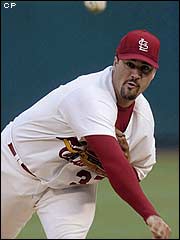 According to Pittsburgh Post Gazette, the Pirates plan to pursue Jeff Suppan. He is expected to make 8-9 million when the Pirates only have 15 million to spend. The reason he is drawing so much attention is because of his impressive first half of the season, and his excellent play in the off season. Several other teams are reportedly pursuing him so the Pirates might have a hard time luring him to Pittsburgh. The Pirates have two goals this off season-one, two acquire a lefty power hitter, and two, a starting pitcher. Suppan "fits the bill" for pitching, but it will depend on whether the Pirates really want to go all out for him. He will probably receive a 3 yr. 24-25 million dollar deal.