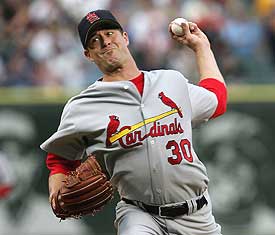 Although Mulder probably won't be fully recovered by the time of opening day, he is still drawing a lot of interest from a lot of teams. The Rangers, Giants, Diamondbacks, Padres, Dodgers, Indians, Mets, Devil Rays and Orioles have all shown interest in acquiring him. The Rangers met with him in Arizona to discuss a possible deal. He will most likely receive a one year, incentive laden contract. Mulder went 6-7 with a 7.14 ERA and 50 K. He pitched in 93.1 innings before injuring his left rotator cuff. His return is expected around May, possibly June.