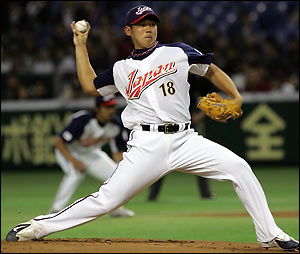 The Red Sox bid 51.1 million dollars for WBC MVP Daisuke Matsuzaka and it appears that Boras' demands may be too high for the Red Sox to support. Red Sox president Larry Lucchino went to Japan to discuss a deal in which the Lions would help subsidize some of his salary. However, MLB officials said that would not be allowed. If the Red Sox are unable to reach an agreement with Matsuzaka by December 14, the money will be returned to the Red Sox and Matsuzaka will have to wait another year. However, Lucchino said in Japan that the Red Sox have sent a fair and comprehensive offer to Matsuzaka's agent, Scott Boras. Scott Boras is asking for a three year deal, making 14-15 million each year. However, the Red Sox are looking for a 10-12 million dollar deal with more years. The Red Sox may have to compromise a deal giving Matsuzaka more money, but in doing that, Boras would accept a four year deal.