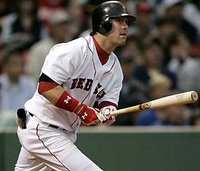 According to the Boston Globe, the Red Sox are leaning towards offering arbitration to OF Trot Nixon. Nixon, who would add to an already deep outfield could make 7-8 million in arbitration and it appears that not too many teams are inquiring about him. The Indians went after and Dave Dellucci and that seemed to be the best bet for Nixon. If the Red Sox trade Manny, their outfield would look something like Wily Mo Pena in left, Coco Crisp in center, and J.D. Drew in right, assuming they sign him.