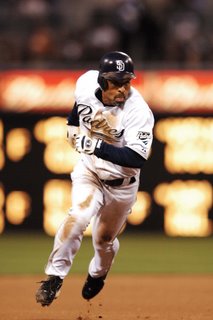 The Milwaukee Journal Sentinel is reporting that Dave Roberts has chosen to sign with the Giants. He narrowed his choices to the Brewers and Giants, but the Giants, who lost out on Pierre, Lee, and Matthews Jr., would not lose out on another outfielder. The offer is believed to a be a three year making 5-6 million annually. Roberts, 34, batted .293 this year with 80 runs scored and 49 stolen bases in 129 games. The Brewers, who were looking for a proven player to man the Brewers outfield, will now have to look to the second-tier players like Kenny Lofton. Although the "top three center fielders" are off the market, Kenny Lofton and Steve Finley would not be bad fallback players, especially for a team like the Brewers.