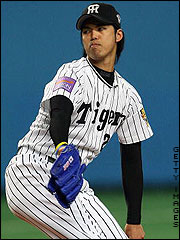 Does that surprise you? After losing out on Daisuke Matsuzaka to their rivals the Red Sox, the Yankees needed to make a splash. I do not know how big a splash this is considering his record in Japan was only 14-9. Yes he did have a 2.97 ERA and has been able to rack up innings the past six years in Japan, but, he is a number five starter, not even 15 million is worth it for a number 5 starter. The two main reasons the Yankees posted so high for Igawa is one: They needed to nearly match the Red Sox, and two: they need a pitcher. Other teams that were interest were: Padres, Mets, Cubs, Rangers, Dodgers, Mariners, and Indians.