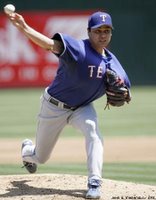 The Yankees have had conversations with free-agent right-hander Vicente Padilla, who was 15-10 with a 4.50 ERA for the Texas Rangers last year. A baseball official said that Padilla is one of many pitchers they have interest in. Ted Lilly, Andy Pettitte, Roger Clemens, and Gil Meche. However, after giving 26 million to the Tigers (Japan), they may turn their attention to someone a little less expensive. Lilly is looking for a four year deal 40-45 million dollars, and no one is sure wheather Pettitte will pitch next season? They will probably concede Lilly to the Blue Jays and turn to Pettitte if they lose out on Meche and Padilla. Gil Meche and Vicente Padilla are looking for 8-9 million. Padilla and Meche are being pursued by most of the same teams. The list includes the Blue Jays, Royals, Cubs, Rangers, Giants, Dodgers, Pirates, and Diamondbacks. Many other teams have mentioned the two players as players they plan to pursue.