Yankees Will Try For Willis

Share All sharing options for: Yankees Will Try For Willis 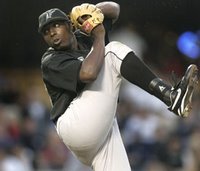 According to the New York Post, the Yankees plan to package a deal for Dontrelle Willis. Although several Marlins officials said he is not on the market, a trade consisting of Melky Cabrera, Humberto Sanchez, and several other players may be able to do it. I doubt the Marlins will strike a deal, he is the best pitcher they have had in 15 years and he is still very young. Although he struggle this year going 12-12 with a 3.87 ERA. Career wise, he has gone 58-39, with a 3.44 ERA. Going to New York, would definitely turn him into the pitcher he was in 2005. With all the run production and above average defense, he would become the best number 2 starter in the game.