Arizona in Search of Pitchers

Share All sharing options for: Arizona in Search of Pitchers 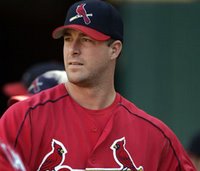 Diamondbacks GM Josh Byrnes continues to look for pitching. They have made an offer to Mark Mulder, but there have been no reports suggesting he is nearing a decision. According to his agent Greg Clifton, he was very impressed by the Rangers sales pitch. "The Rangers really laid out the red carpet,'' agent Gregg Clifton told ESPN.com's Jerry Crasnick. "Mark was very impressed.'' Mulder, who went 6-7 with a 7.14 ERA, is also drawing interest from the Cardinals, Mets, and Indians. They are also looking at free agent David Wells, but according to GM Kevin Towers, Wells is leaning towards returning to San Diego and a deal could be sketched out next week. They may also look to trades and have interest in trading for Oakland's Danny Haren and Texas' Akinori Otsuka.