Share All sharing options for: Brewers Make Offer to Suppan 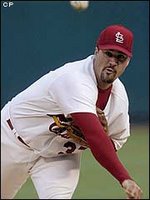 According to FOXSPORTS.com, the Brewers have offered Jeff Suppan a four year deal, worth about 45 million dollars. Suppan's representatives met with the ones of the Brewers and said a formal offer was made Wednesday. Suppan went 12-7 with a 4.12 ERA for St. Louis last season and was the NLCS MVP. Suppan, who met with the Mets yesterday, is also being pursued by the Pirates, Giants, Rangers, and Indians.