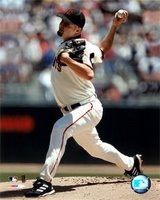 The biggest news coming out of the Winter Meetings today is that Jason Schmidt has agreed to a 3 year, 47 million dollar deal with the Dodgers. Ted Lilly's agent, Larry O'Brien, has told the Blue Jays that Ted Lilly will sign with either the Yankees or Cubs. According to Jon Heyman, if the Yankees offer Ted Lilly a 4 year, 40 million dollar offer or match the Cubs (4/44), he will accept their offer. However, Yankee officials prefer Pettitte because they do not want to commit to a four year deal. However, if they give him the "go-ahead" to sign him, he will waste no time to do so. According to the Seattle Post-Intelligencer, Gil Meche will sign with the Cubs to a four year deal, worth 35-37 million. The A's and Mike Piazza have agreed to a one year, 8.5 million dollar deal. Ken Rosenthal says the Mariners and Braves are talking about a swap of Rafael Soriano and Horacio Ramirez. Finally, the Blue Jays are closing in on a deal with Matt Stairs.