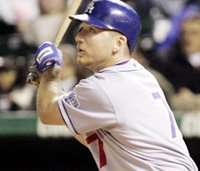 The Red Sox were planning to announced the signing of J.D. Drew tomorrow but will have to delay the announcement because he flunked his physical. The Boston Herald is reporting that Drew's physical has raised a red flag. It has been two weeks since they agreed to a deal and with the flunking of his physical, the Red Sox will be forced to restructure a deal. Drew, who has battled injuries his whole career, batted .283 with 20 HR and 100 RBI.