Share All sharing options for: Hillenbrand Looking For Two Years 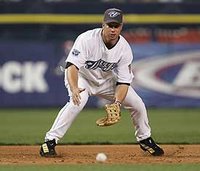 Shea Hillenbrand, who was originally looking for a three year said he is willing to accept a two year deal. This could work out nicely for the Yankees, who are looking to add Hillenbrand to play first base. "We are having discussions, and [the Yankees] are one of the teams in the mix," agent Dan Lozano said. "We aren't as far along as we would like with all the teams but hopefully in the next couple of days we will have something." Hillenbrand, 31, batted .277 with 21 HR and 68 RBI with the Blue Jays and Giants.