Share All sharing options for: Jacque Jones for Jason Jennings? 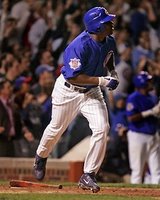 The Cubs have offered Jacque Jones to the Rockies for Jason Jennings. Jones, who is scheduled to make 4 million in 2007 and 5 million in 2008, would probably then be traded some where else. To get a deal done, the Cubs would probably need to trade one of their young pitchers too. Hendry has said that Rich Hill is untouchable, so he will look to trade one of the young pitchers who had success in AAA, or something like Juan Mateo or Carlos Marmol. Jones batted .285 with 27 HR and 81 RBI. Jennings pitched 9-13 with a 3.78 ERA and 142 K. The Cubs are looking to add a center field, and it appears they are either going to sign Julio Lugo or Kenny Lofton.