Johnson Not Worth The Risk for Diamondbacks

Share All sharing options for: Johnson Not Worth The Risk for Diamondbacks 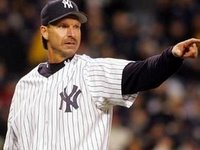 The Diamondbacks and Yankees have had several talks concerning Randy Johnson, but the Diamondbacks feel the asking price is to high. According to one baseball source, the Yankees are asking for two pitchers, and a reliever. However, it is not clear whether Johnson will even be ready for Opening Day. This could have been a desperate attempt to draw fans but GM Josh Byrnes now feels the long run effects will actually turn out to be bad for the Diamondbacks. Johnson, who went 17-11 with a 5.00 ERA, is also drawing interest from the Padres and Giants.