Share All sharing options for: Lofton Fallback for Cubs 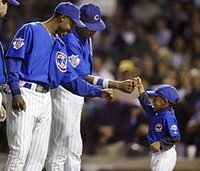 According to Chicago Tribune, the Cubs are working to sign Kenny Lofton to a one year deal. Instead of signing someone like Julio Lugo for ten million, the could sign Lofton for 5-7 million for one year. By pursuing Lofton, the Cubs could be serious about adding two premier pitchers. A one year deal would also guarantee that Felix Pie would be the center fielder in 2008. But does Lofton just want to be a one year rental? The Cubs would probably need to give him a two year deal and platoon Pie with Lofton in '08. If the Cubs sign Lofton, it would be his second stint with the Cubs. In 2003, he came over with Aramis Ramirez for Bobby Hill, Jose Hernandez, and Matt Bruback. Lofton hit .301 with 32 bases stolen.