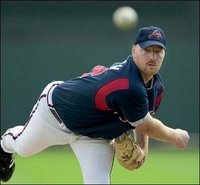 The Mariners have asked to review the medical files of former Brave John Thomson in preparation to make a one year deal. Thomson, 33, visited Seattle on Thursday and a source close to negotiations said they are closing in on a deal. "Thomson won just six games and threw only 179 innings the previous two seasons because of injuries. He went just 2-7 with a 4.82 earned-run average for Atlanta last season after being sidelined almost the entire second half by shoulder trouble." Thomson went 14-8 in 2004 and is known for being a ground ball specialist. With the Mariners great defense, he should fit nicely there, that is if he can stay healthy. The Mariners have had talks with outfielder Luis Gonzalez and plan to meet with him in Orlando next week. Gonzalez, who is being pursued by "four or five other teams," hit .271 with 15 homers, 73 runs batted in.

MARINERS NOTES
-They bid 20 million hoping to win the rights of Igawa.