Mets Close in on Zito?

Share All sharing options for: Mets Close in on Zito? 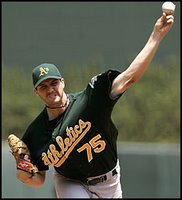 The Mets had a fleet of front office executives fly to L.A. to meet with Barry Zito and Scott Boras, and according to sources close to negotiations, the meeting went very well. While the Mets have yet to make an offer, the Rangers were quick to offer Zito a five year deal, worth about 78 million dollars. The Mets are hoping they can land Zito for something similar to what Roy Oswalt got (5/73), but with Scott Boras as his agent and with players like Gil Meche making 55 million dollars, he is in for a lot more. The Mets plan to meet with Boras again this week but do not expect anything to get serious until January. Zito and Boras have already met face-to-face with the Mariners, Giants, and Rangers. According to Newday, the Giants plan to make a serious run for Barry Zito so he can fill the spot Jason Schmidt had. Zito was 16-10 with a 3.83 ERA for the Athletics last season.