Share All sharing options for: Mets Join Race for Mulder 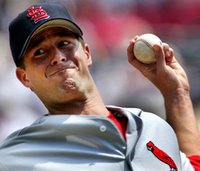 The Mets will join the Rangers, Indians, Diamondbacks, Cardinals, Giants, and Orioles in the hunt for Mulder. The Rangers and Diamondbacks have already met with Mulder's representatives and the Rangers plan to meet with him again on Tuesday. His agent, Greg Clifton also plans to talk with the Indians on Tuesday. Mulder, who is still recovering from surgery, will not even be ready for Opening Day. Mulder went 6-7 with a 7.14 ERA and 50 K in 93.1 innings. In 2005 however, Mulder went 16-8 with a 3.64 ERA and 111 K.