Share All sharing options for: Mets Mystery Team for Suppan 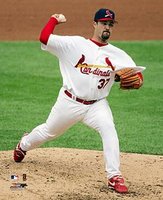 The Mets who met with Barry Zito yesterday, met with free agent pitcher Jeff Suppan today. This does not mean that the Mets are out of the running for Zito, it means that Suppan is a backup plan in case they lose out on Zito. Jeff Suppan would not be bad for the Mets, considering he has played in the NL the past four years. While advanced scouts are reluctant to say whether Zito will be a success in New York: "The last two times I've seen him the last couple years, he wasn't on at all. He struggled getting his breaking ball over for strikes, and when he does that, he's in trouble. He can't get by on a power arm." Suppan, who is expected to command a four year deal near 45 million dollars, has also met with the Brewers and Pirates.