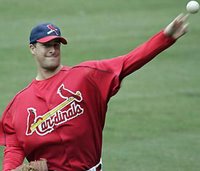 According to the Boston Globe, the Indians have made a strong offer to Mark Mulder. The offer is believed to be a two year deal, worth 8 million dollars in guaranteed money. However, he can earn up to 15 million dollars in incentives. Agent Gregg Clifton has said that along with Cleveland, the Rangers have been very aggressive in pursuing Mulder and have made a strong offer. Now that Mulder is home from his honeymoon, a decision is expected sometime next week. Mulder, who went 6-7 with a 7.14 ERA is also drawing interest from the Cardinals.