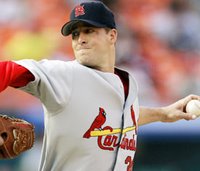 Mark Mulder has narrowed his list down to three: Texas, Cleveland and St. Louis are now the front-runners to add Mulder. The Diamondbacks were in the running but were informed they are no longer being considered. The Diamondbacks made a 1 year, 1 million dollar offer with incentives that would reach 2.5 million dollars. They were also four options in the deal. Both Texas and Cleveland offered Mulder two years, but amounts are unknown. Mulder's agent, Greg Clifton expects Mulder to make 20 to 25 starts next season. Mulder was 6-7 with a 7.14 ERA with the Cardinals. Mulder is expected to continue throwing January 1st and make a full recovery from his shoulder surgery which he had on September 12th. According to the Fort Worth Star Telegram, Mulder has narrowed his choices to the Cardinals or Rangers.

Keith Foulke has reached a preliminary agreement with the Cleveland Indians, according to FOXSPORTS.