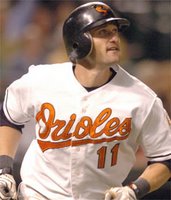 According to the Baltimore Sun, the Mets and Cubs have made strong offers to Dave Newhan. Newhan, who was not tendered by the Orioles, has a great chance to make both clubs, but will probably have to accept a minor league deal. If he were to join the Cubs, he would could make the roster if they decide to send Ronny Cedeno to Triple A Iowa to play regularly. Although, he is almost guaranteed a spot on the Mets roster, assuming the Mets look to trading for a pitcher. Newhan, who batted .252 with 4 HR and 18 RBI will most likely decide after the New Year.