Padres Looking to Hit it Big

Share All sharing options for: Padres Looking to Hit it Big 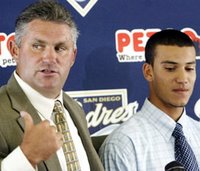 A report late last night surfaced saying that the Padres and Greg Maddux were closing in on a agreement. The Padres and Greg Maddux are just talking though, and hope to sketch out a deal by the end of the week. That is not all they are talking to though. According to ESPN.com, the Padres are meeting with Ronnie Belliard and his agent today to discuss a deal. It appears that Tony Graffanino is going to resign with the Padres and that Mark Loretta does not have that much interest in returning to San Diego. Ronnie Belliard is not a bad fallback though. He batted .272 with 13 HR and 67 RBI with the Indians and Cardinals. The Padres will also join the Cubs, Mariners, and Dodgers in their hopes of signing Jason Schmidt. Schmidt is seeking a 3-4 year deal, worth 15 million dollars annually.