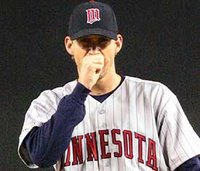 Brad Radke officially announced his retirement after twelve seasons with the Twins; he only had two seasons under ten wins. He had a career high 20 wins in 1997 and finished 2006 going 12-9 with a 4.32 ERA and 83 K. He contemplated retiring towards the end of 2005 and all of 2006 because of shoulder problems. The only option was surgery, and Radke thought it would just be better to call it a career. "To lose him forever, that is going to be tough," Torii Hunter said. "I was lucky enough to be the center fielder standing behind him for quite a few years, and to watch him mastermind the game like he did, it was unbelievable. Brad Radke has been part of the Twins so long that it's hard to see him go." He had a career record of 148-139 with a 4.22 ERA and 1467 K.