Share All sharing options for: Rangers, A's Fight for Piazza 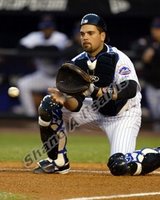 According to MLB.com, the Rangers are very serious about signing Mike Piazza. The Rangers would use Piazza as a designated hitter, behind Teixeira and Blalock. The Rangers interest, which became known when the Padres declined to offer him arbitration, batted .283 with 22 home runs and 68 RBIs in 126 games. Piazza, 39, is a Type A free agent, but the Rangers don't have to forfeit a draft pick because he was not offered arbitration. The A's and Phillies are the only other teams to have shown any interest in signing Piazza.