Share All sharing options for: Seven Teams After Lilly 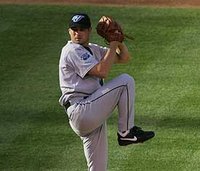 Earlier today, Jason Stark reported that Ted Lilly was set to sign with the Cubs. However, the rumor was false and Lilly's agent is planning to meet with the following teams tomorrow: Cubs, Giants, Yankees, Blue Jays and Mariners. Larry O'Brien was quick to squash the rumor that he has agreed to a deal with the Cubs. Lilly is seeking a four-year deal in the $35-40 million range, and the Cubs are among the clubs to have made him an offer. "We're beyond the preliminary stage [with the Cubs], but our discussions are ongoing," O'Brien said. Yankees GM Brian Cashman has said he has had discussions with O'Brien and they both have interest in returning to New York. Finally, Jays GM J.P. Ricciardi has offered Lilly arbitration and he has til Thursday to accept. However, O'Brien says that they have had regular discussions and plans to meet with them tomorrow.