Share All sharing options for: Three Horse Race for Lugo 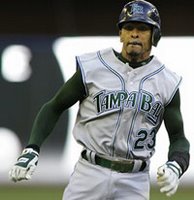 According to the New York Daily News, the Mets have made an offer to Julio Lugo. The Red Sox, have a growing interest in Lugo to play shortstop, while the Cubs have interest in having him play center field. Lugo, 31, batted .278 with 12 homers, 37 RBI and 24 steals with the Devil Rays and Dodgers. Julio Lugo's agent, Jeff Borris, is believed to have a good relationship with Omar Minaya, so if Lugo wants to go to New York, there should not be a problem. However, Cubs manager Lou Piniella may have influence in luring Lugo to Chicago. Lugo admired Piniella very much and may want to be reunited with his former manager. Lugo has played mostly shortstop in his career but has played 17 games in the outfield, so do not rule the Cubs out. But if Lugo feels most comfortable playing shortstop, the Red Sox have the advantage. However, having to spend nearly 65 million on a pitcher and working a trade for Manny Ramirez, they might fall a bit short with a bid, compared to the Mets and Cubs at least. Lugo is seeking a 4 year deal, worth 8-10 million annually. The Mets and Cubs have both made offers to the free agent 2B/SS/OF.