Yankees After Pineiro, Reitsma, and Mientkiewicz

Share All sharing options for: Yankees After Pineiro, Reitsma, and Mientkiewicz 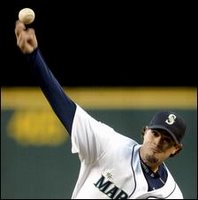 The Yankees have had preliminary discussions with Doug Mientkiewicz about becoming their new first baseman. They plan to move Jason Giambi to DH, and hope to sign Mientkiewicz, or another first baseman. In 91 games, he batted .283 with 4 HR and 43 RBI. However, he has played a total of 178 games over the past two years. Also, the Yankees are looking to add more pitching and are looking to non tenders Joe Pineiro and Chris Reitsma. If the Yankees signed Pineiro, he would be used as a spot starter because of his abilty to eat up innings. Pineiro, 28, was 8-13 with a 6.36 ERA for Seattle in 2006. Reitsma, who would be used strictly in relief, went 1-2 with an 8.68 in 27 games for the Braves this year before season ending elbow surgery.