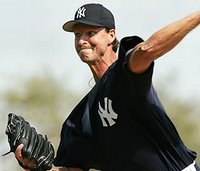 A source close to negotiations has said that the Diamondbacks have held discussions with agent Alan Nero about restructuring Randy Johnson's deal. The Yankees, who have also held discussions with the Padres, are looking for at least two prospects, maybe three. Dustin Nippert, Micah Owings and Ross Ohlendorf are three of the best prospects in the Diamondbacks organization that have come up in trade talks. Nippert, 25, was 13-8 with a 4.87 ERA in Triple-A last season and maybe ready for the majors in 2007. Owings was 6-2 at Double-A and 10-0 at Triple-A and Ohlendorf spent most of last season in Double-A, going 10-8 with a 3.29 ERA. If the Yankees are able to pull a trade for at least two of their prospects, they could look to package three or even four of them once they are more developed for a premier pitcher. According to the East Valley Tribune, the most logical trade will be Brandon Medders and Dustin Nippert for Randy Johnson and cash. The Yankees would send all of Johnson's contract to the Diamondbacks allowing them to eat the three or four million that is taken off from his original deal. However, Johnson, who went 17-11 with 5.00 ERA and 172 K, will have to waive his no trade clause to complete the deal.