Yankees Concede Lilly to Others

Share All sharing options for: Yankees Concede Lilly to Others 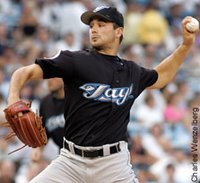 When posting for Kei Igawa, it was unclear who would win the rights. The Yankees, who were expecting to seriously pursue Ted Lilly have no more interest in signing him now that they have Kei Igawa. "In my conversations with Brian [Cashman], it was maybe we would get together at the Winter Meetings," O'Brien said. "But now they have the rights to [Igawa], I don't know, they may not have a need to go after Ted. I haven't heard from Brian." Lilly, who is expected to command close to ten million has already received an offer from the Cubs. He has yet to receive an offer from the Blue Jays. The Giants and Dodgers have also shown interest and Lilly may draw him there because of location. He was rumored as a favorite to go there because of family purposes. However, his agent has said they are having serious negotiations with Cubs over a four year deal worth 36 to 37 million dollars. Lilly was 15-13 with a 4.31 ERA for Toronto this past season, when he was paid $4 million.

YANKEES NEWS
- The Yankees are looking to sign Igawa to a four to five year deal worth 4.5 annually.