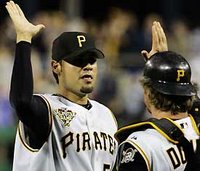 The Yankees are supposedly willing to part with highly touted prospect Melky Cabrera in exchange for reliever Mike Gonzalez. Cabrera, 22, hit .280 with seven homers, 50 RBIs and 12 steals in 130 games as a rookie last season. A deal is far from being struck because it appears that the Pirates are asking for at least two players. Gonzalez, who went 3-4 with 24 SV and a 2.17 ERA is also drawing interest from the Braves, Red Sox, and Indians.

UPDATE: A three way trade is in the works that would send Melky Cabrera to the Braves, Adam Laroche to the Pirates, and Mike Gonzalez to the Yankees.