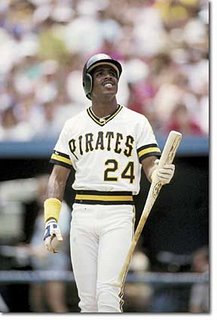 According to numerous sources around the Baseball network, Barry Bonds failed an Amphetamine Test last season. When Bonds was told he tested positive, he was quick to point fingers at teammate Mark Sweeney, who he said was the one he took the substance from. Bonds, who is still working out a one year deal with the Giants, batted .270 with 26 HR and 77 RBI. However, Mark Sweeney's agent, Barry Axelrod commented on the situation saying "he [Mark Sweeney] did not give anything to anybody and he doesn't have anything illegal," Axelrod said. The Giants, who are known to be strongly against the use of steroids or any illegal drugs, have not publicly said anything yet, but are still working on the "language" of the deal. Barry Bonds is only 22 home runs shy of breaking Hank Aaron's home run record, but might be in contract trouble not that he has tested positive. Bonds had reached a preliminary agreement with the Giants last month for one year, but the Giants could easily back out of the deal. If I were the Giants front office, I would "cut my losses" and find a replacement. All Bonds can now bring to the Giants is negative media coverage and press that will distract some players. There are still free agent stopgaps like Todd Hollandsworth, Bernie Williams, Darin Erstad, or Steve Finley that could fill in for one year and then clear the way for a premier free agent like Andruw Jones, Bobby Abreu, Jermaine Dye, or Ichiro Suzuki. Not only would this save the Giants negative press coverage and a bad attitude in the clubhouse, but Barry Bonds batted .270 last year with 26 HR and is no where near worth 20 million dollars. Just ten minutes ago, Barry Bonds commented on the situtation denying that Mark Sweeney was involved: "He is both my teammate and my friend," Bonds said in a statement. "He did not give me anything whatsoever and has nothing to do with this matter, contrary to recent reports. I want to express my deepest apologies especially to Mark and his family as well as my other teammates, the San Francisco Giants organization and the fans."