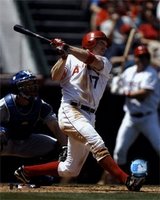 The White Sox and Darin Erstad have agreed to a one year deal, with an option for a second year, according to MLB.com. This works well considering that Scott Podsednik will be out for six weeks after groin surgery. Erstad batted .221 with 0 HR and 5 RBI in 40 games with the Angels. The Phillies and Antonio Alfonseca have agreed to a one year deal, according to ESPN 1000. Alfonseca was limited to 19 games last season for Texas due to a sore right elbow. Although he started the season with a 1.69 ERA for the Rangers, he finished with a 5.63 ERA before being designated for assignment on June 9.