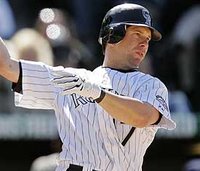 The Red Sox and Rockies are in serious discussions about a trade involving Todd Helton. The Red Sox would likely give up Craig Hansen, along with two other minor leaguers. Of the names being tossed around, Jacob Ellisbury seems to be atop the Rockies wish list. The deal, if any, is still very far from being completed because not only are players not agreed upon, but the amount of money the Rockies will send with Helton's contract. Helton is owed 90.1 million dollars over the next six seasons. He also has a full no trade clause. If Helton were to join the Red Sox lineup, they would probably topple the Yankees with their young power house:

Yes, by trading Craig Hansen away does not improve the closer situation. However, with a vacancy at third base in San Diego, and prospect Kevin Kouzmanoff just a year away, it would make sense to trade Mike Lowell, who is entering the last year of his contract, for someone like Scott Linebrink and/or another minor leaguer. Then Kevin Youkilis would take over at third base. For the Rockies, this leaves a whole at first base and would make their lineup much weaker:

Taking a possible 20 home run hitter away from this club would only make it worse, especially with mediocre pitching. However, since the deal is only in the preliminary stages, it is hard to tell what the Rockies can really get from the Red Sox.