Helton to Boston No More

Share All sharing options for: Helton to Boston No More 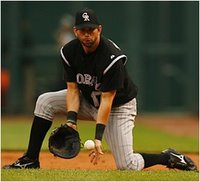 The Red Sox and Rockies trade involving Todd Helton has been called off, according to officials in the Rockies front office. It appears that the Rockies asking price for Helton, who batted .302 with 15 HR, was too high and the Red Sox were not willing to offer more than two players. Obviously, the Rockies would lose a great deal of power by trading Helton away and that alone bulked up their asking price. "It didn’t work out," said Monfort. "When you are taking about a player of Todd Helton’s abilities, you need to get someone back who will be an impact player, and it didn’t work out."