It's All Business for Zambrano

Share All sharing options for: It's All Business for Zambrano 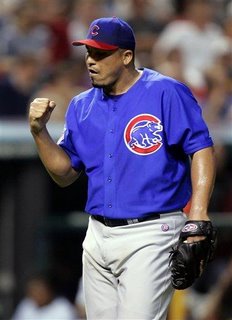 The Cubs held their annual Cubs Convention this weekend and Zambrano, Hendry, and Piniella were hounded with questions concerning the contract of Zambrano. When arbitration figures were submitted, Zambrano sought $15.5 million in salary next season after the Cubs offered 11.025. Jim Hendry met with the agents of Carlos Zambrano on Saturday and they are willing to negotiate until the season starts."I don't want to talk about contract when the season starts. After April 1st, or whatever day the season starts, I don't want to talk about contract. I want it before the season starts or during spring training," Zambrano said Friday during the team's winter convention. Zambrano closed his conference by adding he would like to stay here [in Chicago], but business is business. Zambrano went 16-7 with a 3.41 ERA and 210 K.

"He spent a lot of money. I hope he has more for Big Z," Zambrano said.