Share All sharing options for: Mariners Finalize Deal for Weaver 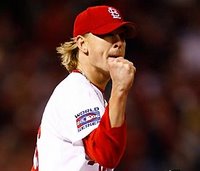 The Mariners and Jeff Weaver have finalized a one year deal, worth 8.325 million dollars. Weaver, who 8-14 with the Angels and Cardinals, can make up to million more in incentives. The Cardinals, who offered him 12 million over the next two years, were informed they were out of the running right before he reached his deal. Weaver will join Horacio Ramirez and Miguel Batista as the newest members of the pitching staff.