Mariners Near Deal For Weaver

Share All sharing options for: Mariners Near Deal For Weaver 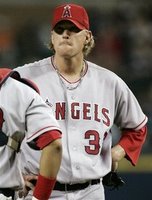 According to Ken Rosenthal, the Mariners and Jeff Weaver are closing in on a one to two year deal. Money is probably the only obstacle holding the deal back, assuming Weaver will get a one year deal, with an option for a second. It was reported earlier today that Weaver would likely choose the Pirates over the Mariners or Mets because of his close relationship with manager Jim Tracy, but myself and FOXSPORTS have learned that Weaver will likely choose the Mariners because of the great defense he will have behind him with Beltre, Betancourt, and Suzuki; and because of Safeco Field, known to be a pitcher friendly ball park. He will also be at the advantage because of he his familiar with the AL West having pitched part of the season with the Angels. The Cardinals, who have already lost Suppan and Marquis, will not continue to pursue Weaver and are content with their rotation as it is. Weaver was 8-14 with a 5.76 ERA.