Share All sharing options for: Nationals Desperate for Pitching 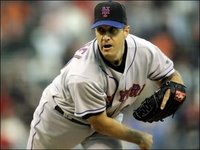 The Nationals have offered contracts to five different starting pitchers, according to MLB.com. Tony Armas Jr., Ramon Ortiz, Steve Trachsel, Jorge Sosa and Jerome Williams are the pitchers they that were made offers. The contracts range from minor league deals to three million dollars, according to multiple sources. Armas, 28, was 9-12 with a 5.03 ERA last season with the Nationals. Ortiz went 11-16 with a 5.57 ERA with a the Nationals. Trachsel went 15-8 with a 4.97 ERA in 164 innings for New York. Sosa was 3-11 with a 5.42 ERA with the Braves and Cardinals last year. The Nationals might be able to draw Steve Trachsel to D.C. because of his relationship with new manager Manny Acta, the former third base coach for the Mets. As of right now, the Nationals pitching rotation consists of John Patterson, with Michael O'Connor likely to be the number five starter.