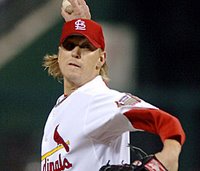 A source close to Jeff Weaver confirmed reports last night stating the Pirates were involved in discussions for the pitcher. The Pirates appear to be the favorites to land Weaver, who is also being pursued by the Cardinals, Mets, and Mariners, because of his positive relationship with former Dodgers manager Jim Tracy. Weaver was 8-14 with a 5.76 ERA with Anaheim and St. Louis last season and lead the Cardinals rotation in the playoffs with a 2.43 ERA in five postseason starts. Weaver is expected to receive eight to nine million dollars over three years.

The Mets have signed Aaron Sele to a one year deal, guaranteeing him 1 million dollars if he makes the 40-man roster. Sele, 36, was 8-6 with a 4.53 ERA with the Dodgers last season.