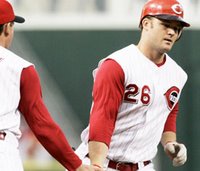 The Reds have rewarded catcher David Ross a two year contract worth 4.5 million dollars. Ross, who was acquired from San Diego in Spring Training, batted .255 with 21 HR and 52 RBI. The Reds also announced they had reached a minor league deal with Paul Wilson, who went 11-6 with a 4.36 ERA. Although Wilson lead the team in wins, he was limited because of injuries.